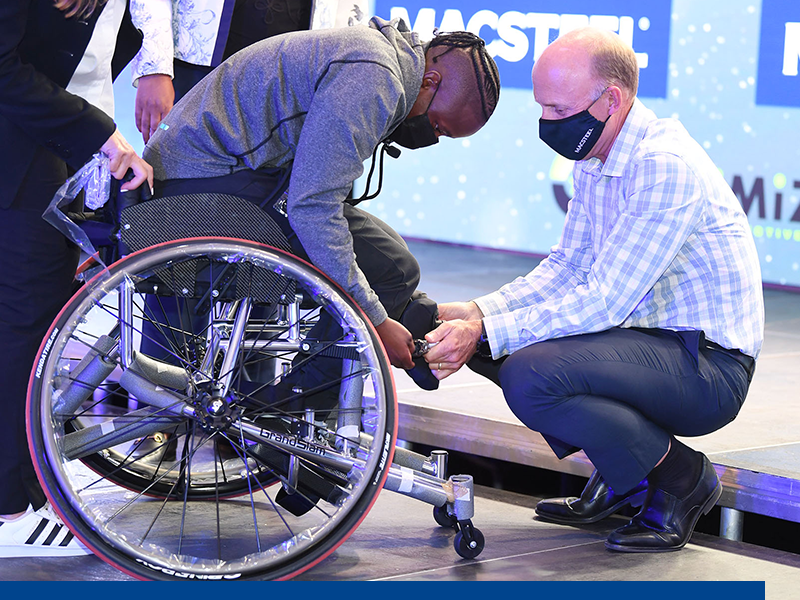 The aspirations of the South African internationally-ranked wheelchair player, Kgothatso “KG” Montjane, received a further boost with the handover of a custom-made wheelchair courtesy of African leading steel manufacturer and supplier, Macsteel.

KG is South Africa’s  & Africa’s No1 ranked  women’s wheelchair tennis player. Having  just returned from participating at the Australian Open, the world No 6 reached her second singles semi-final in Melbourne after producing a faultless display to thrash Colombian Angelica Bernal 6-1, 6-2. Participating in the doubles as well, alongside Lucy Shuker, of Great Britain, she completed the women’s wheelchair doubles final as runners-up.

Mike Benfield, Group CEO of Macsteel said at the handover: “We are immensely proud be able to assist KG, in achieving her goals with this new  wheelchair. KG represents perseverance, she epitomises what it means to never give up.

This state of the art  wheelchair will go a long way in helping KG  enjoy the exhilaration of movement, the thrill of competition and  an added advantage to her game.. We sincerely hope these new wheels of steel will assist KG in  becoming even better than she already is and inspiring the Nation even more than she already does ”.

The wheelchair is the perfect combination of new technology and materials. At its core, this transcendent chair has a unique, pioneering carbon fibre axle, making it significantly stiffer and lighter. The TRI-FRAME chassis design makes a world of difference to the distribution of energy during play. With the perfection of performance and responsiveness that the GrandSlam X offers, she is bound to reach even greater heights

KG was thrilled to receive her new equipment and said “I have always put in 100% effort in my game. I train hard and practice hard, the only differentiating factor has been my wheelchair. My opponents have always managed to turn quicker and get around the

court faster. Now I am finally at a par in terms of equipment. The time has come for me to increase my ranking. This is one thing I can promise Macsteel, I will strive for” giving hope to my fellow tennis players and upcoming players to never give up.

Minister Nocawe Mafu,  deputy Minister of Sports, recreation, arts & culture was in attendance and made reference to COVID-19 and the disruption this made to sportspeople in general and the obstacle both physically and mentally that it caused to KG . “ KG was not spared, as it cost her the opportunity to win the Australian Open Doubles in Melbourne. Her physical fitness was at top level with no injuries however, having not played for almost a year before this tournament, impacted her performance negatively.  As a country, we are very proud of her performance both in the singles and doubles of this tournament. She displayed confidence, will power and mental strength given the psychological and emotional impact related to the pandemic.”

From the Australian Open to the Japan Open, NEC Singles Masters, Doubles Masters, and the 2008, 2012, and 2016 Paralympics, Montjane has played in many tournaments around the world,  including the Swiss Open, her favourite tournament. She is a champion of the sport, having represented South Africa at the 2008, 2012 and 2016 Summer Paralympics, and a World Team Cup participant on the SA team in 2009 and 2011. The Limpopo-born star wrote her name in the history books  becoming the first black African woman to play at Wimbledon IN 2018.

The handover of the state of the art wheelchair, valued at  almost R 200 000, took place at the Blue Wing Hybrid Studio, Ticketpro Dome, Johannesburg on Monday afternoon.