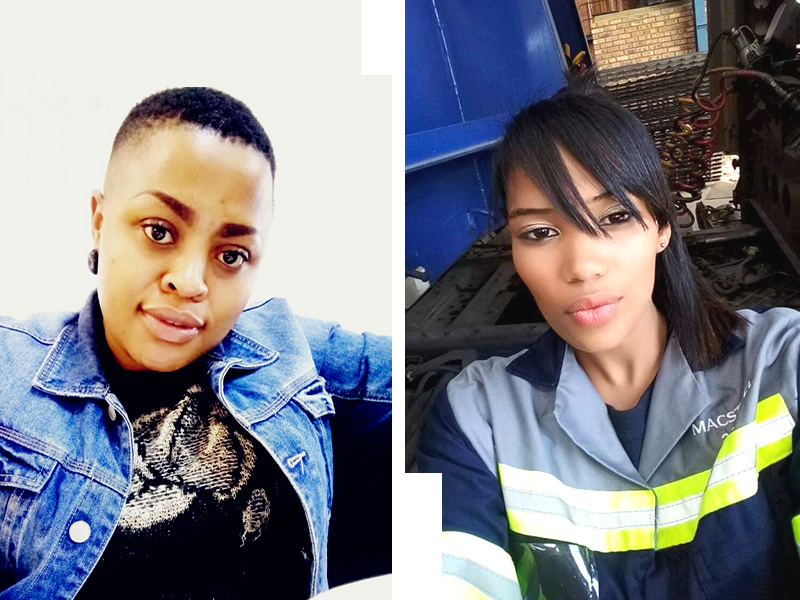 Gender inequality and skills shortages have plagued the South African professional landscape for decades. The equality of women in society at large seems only lately to have become a priority, with President Cyril Ramaphosa’s Women’s Day address highlighting the importance of women in the post-Covid recovery of the country, specifying new requirements for women-owned businesses to make up at least 40% of new government contracts.

There are many industries that see women in South Africa pushing boundaries when it comes to traditionally male-dominated professions, not least of which in the engineering, logistics and steel sectors.

Macsteel has taken it upon itself to change traditional attitudes towards women driving large rigs and maintaining industrial equipment.  Macsteel is not afraid to provide career growth paths for its employees, an attitude most recently documented in an Engineering News interview with CEO Mike Benfield. He is an avid supporter of using an integrated training and skills development ecosystem designed to encourage lifelong learning. “It is up to all businesses to partner up and work towards creating the change we all want to see.”

Twenty-five-year-old Alyssa Mackay is one beneficiary of the company’s approach to training and development. She is a code 14 driver, as well as a health and safety officer and firefighter for her department.  The 5’2” mother of three started her career through a Macsteel logistics learnership programme in 2016 that has seen her grow and excel as a heavy equipment driver for Macsteel Trading Germiston South.

“I was so scared, because at the time I didn’t even know how to start a car, nevermind a truck,” she says. “We started with Code 10 – so I actually learned how to drive a Code 10 truck. Then I got my Code 14 as well.”

One of Alyssa’s mentors is Adeline Khan Pekoe, who was her supervisor at a smaller branch. “She was so supportive.  She used to motivate me: ‘Go do it’.” But Alyssa’s true inspiration for going from zero to Code 14 truck driver was her eight-year-old son.  “When the learnership came out for the driving, he was actually my motivation. My son has ADHD, so he always feels like he can’t do things. He has an obsession with trucks; I think it’s because they’re so big. He was one of the main reasons I started the learnership,” she says.

Alyssa applied for the programme through a company that Macsteel has partnered with to drive skills development. “Initially I did not know it was for Macsteel. It was mentioned that they were searching for women who might be interested in doing a professional driving and logistics learnership.  When I arrived on that first day, I was told that the Company in question was Macsteel.

“The learnership was to last a year, during which a decision was made to extend my contract for another three months.  In January, I was transferred to our Trading Germiston South branch, where I was made a permanent employee.  Now that I am a Code 14 truck driver, my family thinks that that is a pretty big deal.” says Alyssa.

It’s a physically demanding job – eight-hour shifts of loading heavy material and manoeuvring a truck around construction sites and the factory. “I’m constantly on my feet. When I get out of the truck, I actually have to jump out because the step is a bit too high off the ground. I have an app loaded onto my mobile phone informing me that I take about 25 000 steps a day in the plant. I’m physically tired, however the vibe and the energy that I experience is what keeps me going,” she says.

Although Alyssa is one of only a handful of women around the factory floor, she says her male colleagues are supportive. She enjoys the fact that her role goes against the traditional expectations of women in the steel industry, who mostly work in the office environment.

Alyssa says she doesn’t feel pressured to behave differently just because she’s in a male-dominated space. She knows who she is. “I’m unapologetically female and I drive trucks.”

Equally unapologetic is Susan Nape, an Artisan fitter at Macsteel. Her job requires assembling, repairing and maintaining heavy machinery. Fitters and turners are qualified Artisan fitters, who are able to study designs of the parts needed for various machines. After reading the blueprints, they can construct, assemble, manufacture and fit parts of complicated devices that keep industrial equipment in good shape.

“When I was at school, I showed promise in physical science and I loved to solve problems around the house when I was younger,” says Susan. “I recall stripping apart my grandmother’s sewing machine and fixing numerous broken door handles.”  Susan received an apprenticeship with Macsteel, after which she qualified as an Artisan fitter and was offered a permanent position at the company. She has been fixing and maintaining machinery for 10 years.

The Artisan fitter space is still male-dominated, says Susan, “but attitudes are slowly changing”. Fitters and turners spend a lot of time standing, bending and crouching, which can be tiring. Working conditions are often noisy, dirty, crowded and dangerous, which means a lot of attention to detail and a keen awareness of safety are requirements for the job. Susan says this actually helped prepare her for the new Covid-19 safety regulations.

“We have always worn masks as protective gear, so with the new rules, it wasn’t much of an adjustment. I ensure that I keep my social distance when I’m working in the plant, even at lunchtime,” she says.

She has also encountered some misconceptions around her job as an Artisan fitter. “Because of my gender, people automatically assume I can’t carry stuff.” However, Susan has also found that her male friends and colleagues have been sources of help and support as well.

Susan would like to encourage more women in engineering to consider a position such as hers as a worthwhile career and feels that the industry should do more to encourage women to become Artisan fitters. “If you like mechanical engineering, you should pursue this career”, she says.

Both Alyssa and Susan plan to continue progressing in their careers – and Macsteel provides many varied growth paths for these dedicated professionals. Susan plans to attain a managerial position at the company and would like to lecture future artisans. Alyssa is already enrolled in another learnership provided by the company.

It is easy to admire these women of steel, having made it in an industry traditionally reserved for men. But it’s important to remember that Alyssa and Susan are not exceptional because they are women. They are exceptional because they are skilled professionals. All they needed was an opportunity to excel. Macsteel has proudly supported them and given them just that.